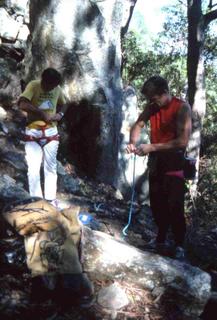 Kim Carrigan’s and others’ adoption of European sport climbing techniques and training strategies set up a framework for climbing in Australia that has persisted from the late 1970s. Until that time, a handful of mostly weekend climbers in the country had ever contemplated training as special preparation for climbing. This was a turning point when ‘climbing’ became many different things. The gradual dominance of sport climbing, most usually accompanied by a reliance on bolting, toproping and multi-day sieges of one pitch problems, pushed ‘traditional’ or ‘adventure climbing’ to the periphery—even creating new names for what in the past was simply ‘rockclimbing’. But traditional climbing persisted and pockets of resistance remain. This trend continues today and although the divisions between various genres of climbing remain blurred, the dominance of sport climbing is apparent in the pages of Australian and international climbing magazines and websites. The focus of the experience has shifted with numbers seemingly playing a more central role than other criteria. This was exemplified by publicity around the one-pitch Punks in the Gym at Arapiles by German climber Wolfgang Gullich which claimed to be the world’s hardest route in 1985. Few, if any, climbers in Australia would have known that it was the same year in which pioneering Lakeland climber Bill Peascod died on the 1st stance of a climb in Wales. He was climbing with Don Whillans at the time—Whillans himself died in his sleep exactly three months later. Six years after his 1st ascent of Punks, Gullich was also dead—killed in a car accident in Germany.