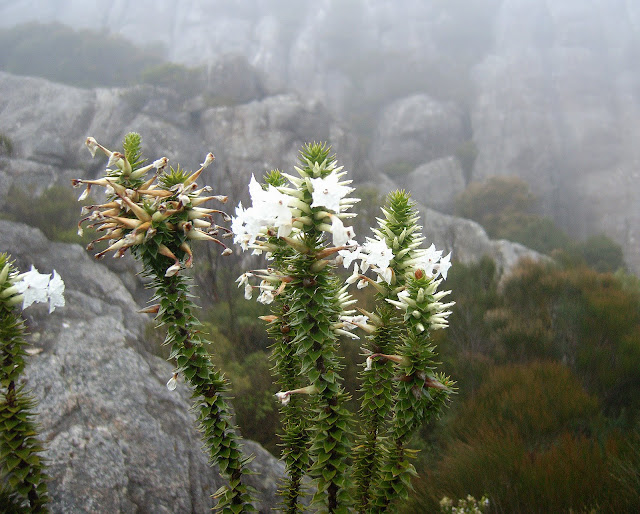 About The living rock

A book based on the material you can view here -- and much more -- will now be available in August 2015.

This blog is a collection of words and images which start to tell the story of the origins of rockclimbing in Australia. It includes material that I and colleagues have gathered from other passionate climbers willing to share their experiences and observations, along with information we've gathered from newspaper archives, personal photographic collections and first-hand accounts by protagonists. We started this quest more than a decade ago and still have some way to travel. The material we have gathered thus far has revealed stories of the emergence of the idea of climbing in Australia before World War II which has shaped the development of what is now known as 'adventure' or 'traditional' climbing in postwar Queensland and beyond. The time period covered by this research stretches from the very beginnings of human interaction with the Australian landscape, shifting to mostly Queensland activity after the second world war. Primarily, these observations do not focus on the period beyond the late 1970s when climbing began to fragment into several, distinctly different elements: sport and gym climbing, bouldering etc, gradually pushing what became known as 'trad' or 'adventure' climbing to the periphery. The detailed story of climbing in Australia from the 1980s onwards is for others to write.

I've also included here some of my own writing about rockclimbing culture in Australia, its genesis, and some of my own experiences as a climber. This includes five columns I contributed to the now departed Australasian Climbing Journal, Crux, between 2006-2007, and a collection of other pieces I have written (and co-written) for various publications over the past decade or so. I hope it will give you some insight into the rich layers that contextualise and define rockclimbing in Australia. You can access these readings by clicking the files on the Blog Archive links on right-hand side of the page.

Like all histories, this is a version of events. It does not pretend to be the definitive account (if there is such a thing) and comes from an obvious Queensland perspective. It offers an alternative to the predominant view of Australian climbing history that has tended to assume that climbing as a mass sport started in New South Wales and Victoria. The somewhat episodic examples here provide some insight into the extraordinary range of mostly young men and women who have felt compelled to move beyond the usual pathways to explore the more elusive aspects of the Australian landscape. Although 'modern' Australian climbing began less than 100 years ago, a small number of individuals has been exploring high places here since the European invasion. Indigenous people had already inscribed every aspect of the landscape into their cosmology for millennia. But this is a story about climbing as a European 'invention'. Each climbing community around Australia and beyond has its own stories, its own histories and I hope this encourages others to tell them. Please pass on this web address to anyone you think may be interested or who has information to add (or correct) what I've presented here.

Reproducing images or text
This blog represents a small fraction of the material that I and others have accumulated during this ongoing project. It has relied on the goodwill and trust of many climbers, current and past, who agreed to be interviewed and who have offered access to their private photograph collections. Please respect the copyright on the photographs published here, asking permission from the original owners (through me, if you like) before reproducing any of the material. But share this with friends, by all means. 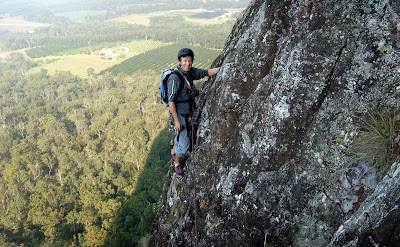 More to come
The book based on the material I and my colleagues have gathered in an effort to tell this fascinating story will be published in 2015. My aim has been to ensure that as many as possible of the images gathered and personal stories related to me by the climbers who have created this history are passed on to future generations drawn to the heights. The research for this continuing project has so far unearthed around 3000 images (most from private, previously unpublished collections) and close to 4000 archival documents (letters, diaries, newspaper and journal articles etc) relating to Australian climbing history. I discovered stories of adventure that have rarely, if ever, been told. I think it offers an insight into a fascinating history that few Australians--climbers especially--are aware. Please enjoy this small sample of Australia's rich, climbing heritage.

Pictures: (above) On Mount Barney and below, the author contemplating life on the east face of Tibrogargan (Michael Meadows collection).